Like all boys who grew up in the 80’s and 90’s, I had a flimsy plastic case full of Hot Wheels and Matchbox cars. I know a lot of people love to collect them, but I wasn’t that infatuated with them. In fact, I preferred all the weird toy cars that lit up or made siren sounds or had damage on them. Still that didn’t stop me from spending hours crawling around on my knees on a giant plastic mat that looked like a small city.

In the mid 90’s, the popularity of Hot Wheels seem to explode with the introduction of bright orange track pieces that cars could do flips on. I was a little outside of the age range for such toys, but my little brother enjoyed the heck out of them. He’d spend hours in his room making elaborate tracks and trying to set it up so his car would make it to the end. We had some good times playing with those tracks.

But the one thing we had just as much fun with was the 1998 video game, Hot Wheels Stunt Track Driver. We’d spend hours on the PC trying to master the drift and keep the car on the tracks. We loved the small scale of the Matchbox cars in a regular sized room and it reminded us a lot of Toy Story which was released just a few years prior. 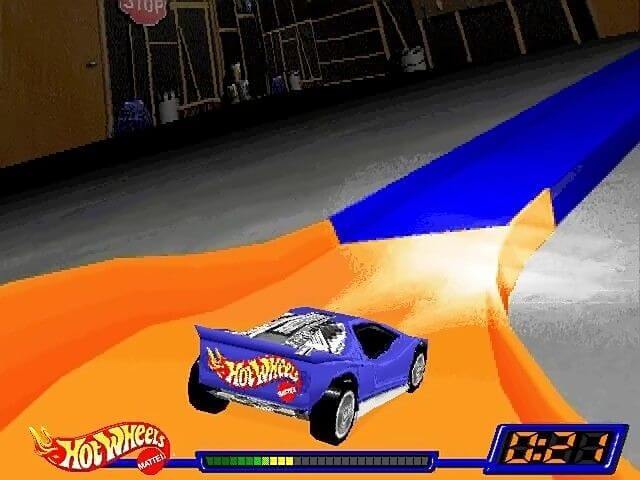 By the time we grew tired of Stunt Track Driver, my brother’s fascination with Hot Wheels had cooled down and we went on with our lives. Those weekends of being thrilled when a car managed to stay on a loop became distant memories.

There have been quite a few Hot Wheels games released since 1998 and the cars themselves have become quite the collector’s item for adults. Still, outside of watching the occasional YouTube video of someone’s cool track in the first person or the time they built a lifesize loop and drove a car around it, Hot Wheels is just something that doesn’t take up much of my time.

Then a few months ago I caught a trailer for an upcoming game called Hot Wheels Unleashed. It looked like a lot of fun and featured some great cars including the Party Van from Teenage Mutant Ninja Turtles. I made a reminder to check the game out when it got closer to release and last week the reviews began trickling it. IGN gave it a 9 and some other reviewers called it the most impressive arcade racer in a decade. I made up my mind, it was time to dive back into the world of Hot Wheels.

I purchased the game this past Thursday and have spent quite a few hours with it.

My first impression was not good. I put the game on medium difficulty and went to race my first race and I finished dead last. I consider myself a very experienced video game racer and it was just startling to finish so bad. So, I turned the difficulty down to easy and tried again and that time I finished mid-pack. I put the game away thinking maybe I purchased a dud.

The next day, I spent a little more time with the game and I changed up the car I was using. Wow, what a difference that made! Unlike some games where the car doesn’t really make all that much of a difference, it’s all the difference in Hot Wheels Unleashed. Good handling is just as important as speed and acceleration and there is a technique to learn while drifting.

It’s impressive because the game is obviously marketed towards kids, but this game has a bit of learning curve and will be challenging for adults.

Once, I began upgrading my car, I found myself enjoying the races and focusing on learning how to get around the corners as fast as possible. The track designs are amazing at times and there is really never a dull moment in the game. You are always racing on the edge of out of control and precision is what it takes to succeed. The game reminds me a lot of Trackmania Turbo with a dash of Burnout just for fun.

I normally hate blind loot boxes, but the loot boxes in this game are fun. You can’t buy them with real money and you only spend in game currency or you get them after completing some challenges. Sadly, I don’t have a real fandom for Hot Wheels, so the history of the cars, their names, and rarity is lost on me but that doesn’t make it any less fun. The game also features an online livery selection where you can decorate your car with paint schemes created by fellow gamers.

I only have two real complaints about the game.

1. I hate that the music speeds up when you boost and slows down when you hit the wall. It really takes me out of the game and the music isn’t all that memorable to begin with. Recently, I began playing with my Outrun Spotify playlist accompanying the game.

2. There is DLC and it’s expensive. $29 for each season pass and I believe there are two scheduled. Some cars will be made for purchase at .99 which is perfectly fair, but the $29 price tag is steep, especially on a $49 game.

Still, I’m having fun with Hot Wheels Unleashed and I even enjoy using the photo mode. All the photos in this article from the game are screenshots I took.

The game looks great, plays great, and sounds meh. For $50 this has been a great purchase and I highly recommend it for fans of arcade racers.

Brandon is an aspiring writer who never finishes a project. He spends his time watching AEW with his wife, wishing he could relive the 90's, and playing his Playstation 5 and Nintendo Switch. When he's not doing one of those things, you can pretty much guarantee he's watching Star Trek or Babylon 5, some cheesy horror movie, or a 90's sitcom. View all posts by Brandon